By merely speaking, God’s breath brought all things into being. Open your mouth right now and let out a breath. God did that and all things were created! From the cosmos to the microscopic.

In two of my previous posts, Being Salty & Being Shiny, we explored the greatness of God in the quantum physics of what happens when something as common as salt, is exposed to fire. Now, we are going to be blown away by another creation of God’s breath.

I was watching a show about the Rosslyn Chapel in Scotland, which was featured in the movie The Da Vinci Code. The construction of the chapel began on September 20, 1456. Here is some history of what was going on around that time period.

The interior of Rosslyn Chapel has many intricate carvings. Among them are 213 cubes or boxes protruding from pillars and arches with a selection of patterns on them. You better sit down now, its about get interesting. The cubes resemble geometric patterns seen in the study of cymatics. Derived from the Greek word meaning “wave”, it is the study of sound vibration visualized. They are also called Chladni patterns. These patterns are formed when a sustained note is used to vibrate a sheet of metal covered in sand. The frequency used dictates the shape of the pattern.

Different frequencies can produce shapes including flowers, diamonds, and hexagons—all shapes present on the Rosslyn cubes. But wait, there’s more! Each vibration correlates with a musical note. Thomas Mitchell spent twenty years cracking the code in the 213 cubes. His son, Stuart, an Edinburgh composer, orchestrated the findings into music called the Rosslyn Motet.

That stone masons in 1456 knew how to create this music into carvings is amazing.

The frequency of human beings falls within the range of 62-72 Hz, which happens to be a “C” on the musical scale.  In speaking with a music professor, he told me that “C” major contains no sharp or flat notes. So to speak as a human, I don’t want to have any words that would come out sharp or flat to the hearer. Nature is said to have a background hum with the underlying note of “F”.

Guess what? God did this is a breath too!

The average frequency of human speech varies from 80 to 260 Hertz. An adult male ranges from 80 to 180 Hz while an adult female ranges from 165 to 255 Hz. Our brains operate on an electrical current, our ears absorb sound vibrations, and we produce sound vibrations with our voices. If frequencies applied to a metal plate can change the sand and create different patterns, then the words we use have the power to effect the frequency of the hearer. Knowing this, I choose to be more careful with the words I use, and the tone in which I speak them.

The old saying goes, “Sticks and stones may breaks my bones, but words will never hurt me.” Well the first part of this holds true, but anyone who has been on the receiving end of hurtful words know the second part is a lie. Words can hurt, producing a frequency that unbalances us, mentally and spiritually.

“It only takes a spark, remember to set off a forest fire. A careless or wrongly placed word out of your mouth can do that. By our speech we can ruin the world, turn harmony into chaos, throw mud on a reputation, send the whole world up in smoke and go up in smoke with it, smoke right from the pit of hell.” (James 3:5-6 [MSG])

That’s what I want God. To resonate-continually sound in a vibrating body caused by waves from another body vibrating with intensity. How do I do this? By resounding-to become impressively sonorous-loud, deep or rich in sound.

I want by being and my words to vibrate the Frequency of Jesus. I want to strike a chord-say or do something which affects or stirs the emotions of another soul.

“The word is near you; ‘It is in your mouth and in your heart,’ that is the word of faith we are proclaiming: That if you confess with your mouth, ‘Jesus is the Lord,’ and believe in your heart that God raised him from the dead, you will be saved.” (Rom. 10:8-9 [NIV])

I want to phteggomai, my friends! To utter Jesus in a clear sound, proclaiming Him in an authoritative voice with the intention of swaying the hearer. I wonder what that would look like on a metal plate covered with sand. What a beautiful pattern that would be. 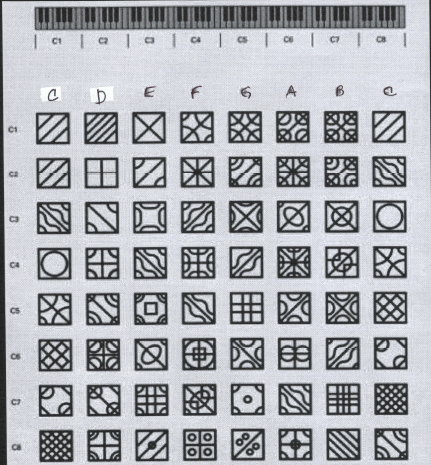 I am a prodigal daughter that has developed an insatiable hunger for the Word of God! I am doing my best to be obedient in sharing what I learn with others, with my own unique spin, using the way God made me, linear with a twist! View all posts by God Still Speaks